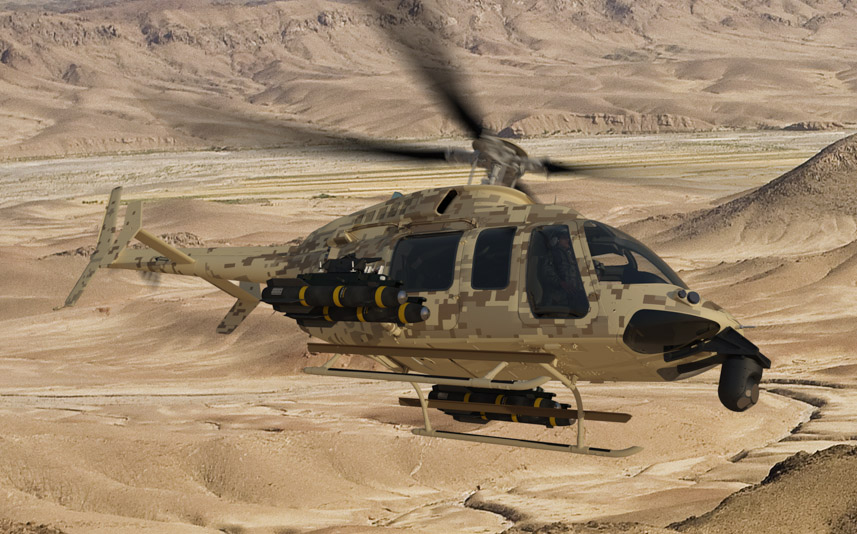 Fort Worth, Texas (May 27, 2015) – Bell Helicopter, a Textron Inc. (NYSE: TXT) company, announced today a milestone sale and delivery of the first Bell 407GT to BBM Inc. to operate in the Middle East and Africa. The Bell 407GT is the armed version of the Bell 407GX, and will be used to perform a variety of missions including law enforcement and homeland security.

“We are thrilled to be the launch customer and to introduce the Bell 407GT to the Middle East and Africa,” said Fred Hees, CEO of BBM Inc. “We were very impressed by the aircraft’s performance and unique capabilities, and are excited to bring this advanced aircraft to our customers in the region to provide a cost effective armed aircraft solution.”

BBM Inc. has purchased 16 Bell 407GXs earlier this year, and has signed a letter of intent for a Bell 505 and a Bell 525 and is focused on providing their customers with industry-leading products.

“Our initial success with the Bell 407GX has expanded our capability exponentially in the Middle East and African markets,” added Hees.

“The Middle East is a huge market for the Bell 407GT and we see this aircraft really growing in the region,” said Steve Suttles, vice president and managing director of sales in the Middle East and Africa. “BBM Inc.’s aircraft is set to go into service later this year, and we are excited for the region to be able to witness the missions this aircraft is capable of completing.

Africair, Inc is the Independent Representative for Bell Helicopter/Textron, Inc. for 33 countries in and around Africa. Bell Helicopter is the premier manufacturer of light to medium size helicopters in the world and produces a full line of single and twin engine helicopters. Bell helicopters are world renowned for their rugged durability, reliability and safety. We provide configuration and completion coordination for our customers utilizing a number of high quality completion facilities.